The Rainbow Warrior off the northern tip of Newfoundland in March 1981. Pierre Gleizes/Greenpeace

Pierre Gleizes has been on many Greenpeace campaigns, capturing images of its vessels and crew on the oceans of the world. He has recently released a book on his experiences with Greenpeace, Rainbow Warrior, Mon Amour.

The Rainbow Warrior was my home for a year. In between 1980 and 1982, I joined the ship as a photographer to document four long Greenpeace campaigns.

During that time, we challenged Japanese nuclear waste import in Europe. We stopped Spanish whalers in their killing fields and we went twice on the Canadian ice flows to save baby seals.

I was the youngest on the crew list and the only French national. A life of action and adventure with amazing people. I just loved it.

During the last 35 years, I have set my feet on 12 different Greenpeace boats as a photographer. Sometimes for a few hours, sometime for a few months.

Even before the bombing, the Rainbow Warrior held a very special place in my heart. It is hard to describe but there was a "soul" on board I never encountered again on any other Greenpeace boats.

During difficult campaigns, the crew's determination and energy successfully turned dreams into reality. We were paid in beers and went where no one else was going.

On 10 July 1985, I was in Paris working as a photojournalist for the Associated Press. I walked into the news room as the first dispatch came in from Auckland.

I just couldn’t believe what I read. A photo showing the boat lying on the bottom of the harbour came in a moment later and the next wire naming Fernando Pereira as a confirmed victim knocked me out.

I knew Fernando well. He had sailed with us as a news photographer on the Sirius during the crazy 1982 summer when Greenpeace led one action after the other to stop the crime of dumping nuclear waste into the Atlantic Ocean.

He later worked as a stringer for the Greenpeace International photo service I had created in Paris.

A few weeks before he flew to Hawai’i to join the Rainbow Warrior and meet his fate, he was in my home with a few friends for a long friendship dinner party. The day prior his departure from Europe, I called him in Amsterdam to wish him "bon voyage".

Since then, I never call anyone anymore to say "bon voyage".

Everybody reacts in his or her own way when one meets desolation and sorrow in real life. Even if the Rainbow Warrior bombing rapidly became an affaire d'etat, it did not heal my pain.

For decades, I closed myself like an oyster on the issue and I never talked about it.

However, in 2010, following the death of one of the original Rainbow Warrior crew members, I realised that I was the depository of a long and strong story and decided to write the book which I titled Rainbow Warrior, Mon Amour: Trente ans de photos aux côtés de Greenpeace (Edition Glénat). 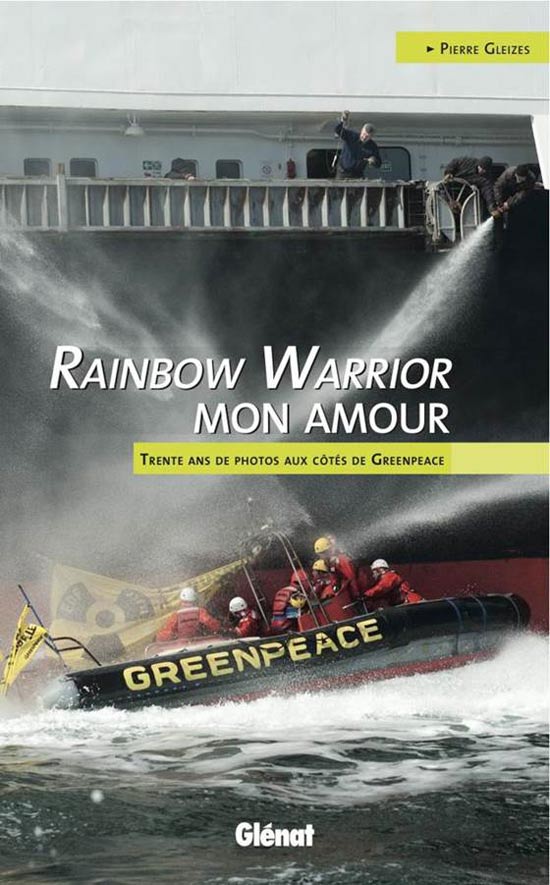 To widen my view of the Greenpeace affair, my editorial project forced me to read a few of the books written by some of the French secret agents involved. Until then, simply seeing one of those covers in a bookshop window would make me feel sick.

There are common points in those books. The main one is that no one in the French military knew who and what was Greenpeace. They make constant reference to the Cold War and the fact that we were a bunch of “communists” – a point I can strongly deny with my personal history.

I was expelled from the old Soviet Union in 1982 after a protest against Soviet nuclear testing. Very few people did such a thing on the other side of the Iron Curtain during the Cold War, it was an incredible action.

To be called a communist for the wrong reason is not just unreal, it is a clear attempt to misinform and manipulate people.

To complete the picture on how impartial Greenpeace was regarding atomic bombs, I have to add that I later took part in actions in Nevada and Moruroa, to protest American and French nuclear testing.

In France, the first book about the "affair Greenpeace" that came out in 1987 was Mission Oxygène by Patrick du Morne Verne (a pseudonyme for Patrick Amory), a tribute to the glory of the military personnel of the DGSE.

To make a long paragraph short, I would simply characterise it as a "Science fiction film script". To give just a couple of examples, he describes how the agents managed to locate the Rainbow Warrior and its black hull in Holland at the beginning of 1985.

I was on board when the ship left Amsterdam on March 2, 1981 and never came back in Europe – and its hull has been painted green since 1978.

Monsieur Amory spits on Fernando's grave and a couple of politicians with the same dishonesty.

Fernando could not defend himself, but politicians took this author to court and he lost every time.

Amory’s only defence was that in spite of its appearance his book was a fictional one and that is was his editor's fault not to have printed a “warning” for the readers.

Then I read Carnets Secrets d'un Nageurs de Combat by Alain Mafart-Turenge. At least he was inside the action team and we learnt hair-raising operational details of how they proceeded.

Mafart says that he could see disaster coming because of the lack of preparation time and general improvisation. The paradox about Mafart’s text, beyond the military style, is that he tells us of his love for nature, wilderness beauty of the world and aboriginal tribes. One could nearly imagine that in another life, he could have been a militant ecologist.

Agént Secrete by Madame Dominique Prieur-Turenge, is a long boring text of inaccuracies and self-justifications. Those people were no match for the situation into which they got entangled. Lack of personal judgment, banal and aggressive comments and blatant factual errors.

Trying to show that she did a good job, she mentioned, twice, that she successfully managed to locate the Rainbow Warrior in a shipyard in Holland (again!!!) at the beginning of 1985. Problem? At that time, the ship was in Jacksonville, Florida, being refitted as a sailing vessel.

During their preparatory investigations, those secret agents managed to confuse the Rainbow Warrior with the MV Greenpeace, which, indeed was in a dry dock in Holland getting prepared for a long Antarctica campaign, with a hull painted black.

The whole operation being prepared at every level with the same amateurism; catastrophe was on the agenda.

Un Amiral au Secret came out in 1997, by Admiral Pierre Lacoste, head of the DGSE (Direction Générale de la Sécurité Extérieure). I disagree with every word he wrote about the necessity of upgrading the French nuclear force de frappe with the tests done at Moruroa but the reading was fascinating.

He comes down very heavily on the French government. He even describes what happened as something that could be called "a terrorist act".

In a shocking passage, Lacoste confirms that he refused the proposal of blowing up the Rainbow Warrior on the high seas. This is a remark which informs us that there are in the French secret service headquarters mad criminals for whom this technical solution was an operational possibility to get rid of Greenpeace.

Lacoste saved François Mitterrand's presidential mandate and his political life. He waited until after his death to leak to Le Monde in 2005 a document in which he clearly charges the French President with the responsibility of approving an action against the Rainbow Warrior.

On 10 July 1985, Fernando Pereira should not have died during this military act of war against two friendly countries. But I cannot help thinking that those massive bombs clamped underneath the Rainbow Warrior could have killed 10 people.